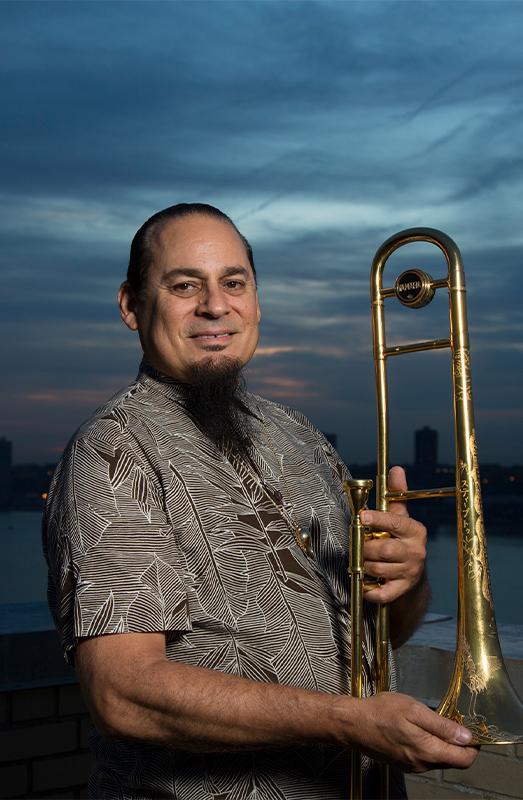 The thought of Steve Turre inevitably conjures the image of a dauntless virtuoso. Over the course of a remarkable career spanning more than five decades, Turre has proved time and time again that he’s one of the foremost masters of the trombone, able to steer his challenging instrument through breakneck turns and imaginative leaps at dizzying speed.

On The Very Thought of You, Turre shows off a less celebrated side of his brilliant artistry: his moving, heartfelt way with a ballad. Luxuriating in timeless melodies and swathed in lush strings, Turre makes his horn sing with delicate lyricism and subtle beauty. Of course, the irrepressible trombonist can’t help but unleash his fiercely swinging side, peppering his ballad set with a few pulse-quickeners here and there.

The Very Thought of You features a stellar quartet ideal for a session that calls for a light touch combined with the soul-stirring depth of feeling that Turre brings to everything that he plays. Turre is joined by pianist Kenny Barron, bassist Buster Williams, and drummer Willie Jones III, supplemented on four of the pieces by a string octet conducted by veteran arranger Marty Sheller. An outstanding pair of guests, legendary tenor saxophonist George Coleman and guitar great Russell Malone, both lend their breathtaking mastery to the music as well.

“There’s a challenge to playing ballads on any instrument,” Turre admits. “It’s not about showing off; it’s about trying to play beautiful, to touch somebody with your sound and with your phrasing. The reason I wanted to do it is because I’ve never done it before. I’ve done so many records where I play fast and complicated. It was time to play ballads.”

Especially on the four immortal classics to which Sheller added strings – “Never Let Me Go,” “Shadow of Your Smile,” “Danny Boy,” and the title track – Turre likened his role to that of a singer, ceding the solo spotlight to his bandmates while focusing his own playing on the interpretation of the songs’ incredible melodies.

“I don’t know anybody on the trombone that can play faster than Curtis Fuller could,” Turre explains. “But when I first came to New York in 1973, I met Curtis and he told me that the hardest thing to do is to play simple and have it mean something. So my role wasn't as the improviser; I was the singer, and my focus was to make the melody say something without over-embellishing it.”

It was some of the music’s most renowned vocalists that inspired Turre’s choice of standards on The Very Thought of You. Nancy Wilson’s versions of the title tune and “Never Let Me Go” convinced the trombonist that he wanted to take on those melodies, while a live rendition of “The Shadow of Your Smile” so captivated him that he added it to the setlist. “Carmen McRae sang nothing but the melody and it was so astounding,” Turre recalls.

The Very Thought of You is not the first time that Turre has melded his voice with strings. On Lotus Flower (1999), he led a sextet where the frontline swapped sax and trumpet for Akua Dixon’s cello and Regina Carter’s violin. And on his 1997 self-titled album he teamed with Sheller – a longtime colleague on the Latin jazz scene – for a string arrangement of the Machito classic “Ayer Lo Vi Llorar” featuring the iconic Afro-Cuban singer Graciela. But the new album marks the first time that Turre has utilized strings in the traditional vein of classics like Clifford Brown with Strings or Nat King Cole’s elegant sound.

“With ballads, it’s not about playing loud and boisterous, it’s about playing with subtlety,” Turre says. “The strings help to bring that out. Plus, Marty Sheller’s writing was just sublime, so tasteful and lush and not overdone but complimentary to a T.”

After opening the album with a swooning “The Very Thought of You,” the band is joined by Malone for the first time on an up-tempo but laid-back romp through “September in the Rain.” Then Turre and Malone pair off for the trombonist’s intimate duet piece “No Regrets.” The song was originally written back in the ‘70s while Turre was playing bass in drummer Chico Hamilton’s band, where once a night the leader would take a break and leave Turre to play duo with guitarist Rodney Jones. On “Freedom Park, SA” Turre and Jones go head to head with a free improv sparked by a melody conceived by Turre while playing a festival in South Africa last year.

Turre contributes his own ballad to the proceedings with the wistful “Time Will Tell,” then nods to his late mentor J.J. Johnson (as well as his wife) on the trombone giant’s touching “Carolyn in the Morning.” Coleman’s heart-wrenching solo on “Never Let Me Go” is a highlight of the album, but Turre welcomes him back to let loose on a rip-roaring take on Charlie Parker’s “Yardbird Suite.”

The album concludes on a poignant note with the sentimental Irish ballad “Danny Boy,” a particularly meaningful choice for Turre. He fell in love with the song through Ben Webster’s version, but never played it until his brother-in-law, frail but still alert at 100-years-old, made the request. On the opposite end of the age spectrum, Turre’s gentle but jaunty “Sachiko” is named for a baby whose smile touched his heart during a chance encounter in San Francisco.

There are countless musical moments that might come to mind at the thought of Steve Turre: his formative stint with Art Blakey’s Jazz Messengers, his innovative collaborations with Rahsaan Roland Kirk, his tenures on the road with Ray Charles or Woody Shaw, his decades as a member of the Saturday Night Live band, his ground-breaking use of conch shells as musical instruments, countless collaborations with the greatest artists in jazz and popular music. With The Very Thought of You, Turre offers a beautifully vulnerable and lyrical side to that catalogue of memories.