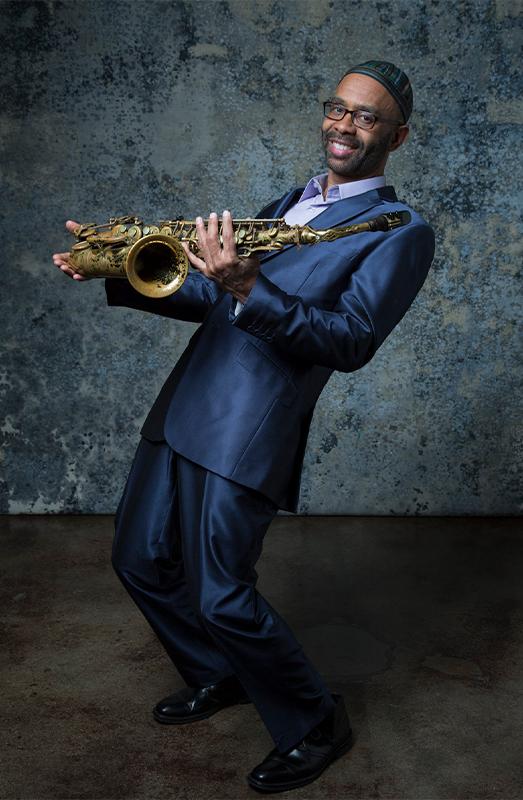 Kenny Garrett’s latest release, Sounds from the Ancestors, is a multi-faceted album. The music, however, doesn’t lodge inside the tight confines of the jazz idiom, which is not surprising considering the alto saxophonist and composer acknowledges the likes of Aretha Franklin and Marvin Gaye as significant touchstones. Similar to how Miles Davis’ seminal LP, On the Corner, subverted its main guiding lights – James Brown, Jimi Hendrix and Sly Stone – then crafted its own unique, polyrhythmic, groove-laden, improv-heavy universe, Sounds from the Ancestors occupies its own space with intellectual clarity, sonic ingenuity and emotional heft.

“The concept initially was about trying to get some of the musical sounds that I remembered as a kid growing up – sounds that lift your spirit from people like John Coltrane, “A Love Supreme;” Aretha Franklin, “Amazing Grace;” Marvin Gaye, “What’s Going On;” and the spiritual side of the church,” Garrett explains. “When I started to think about them, I realized it was the spirit from my ancestors.”

Indeed, Sounds from the Ancestors reflects the rich jazz, R&B, and gospel history of his hometown of Detroit. More important though, it also reverberates with a modern cosmopolitan vibrancy – notably the inclusion of music coming out of France, Cuba, Nigeria and Guadeloupe.

“It’s Time to Come Home,” a sauntering yet evocative Afro-Cuban modern jazz original, kicks off the album. Garrett’s melodic passages, marked by capricious turns and pecking accents, signals a “call to action” for kids around the world to come home after playing outside all day. While Garrett originally composed the song in 2019, this incarnation reflects his experiences playing with iconic Cuban pianist and composer Chucho Valdés.

Garrett then pays tribute to the late, great trumpeter and composer Roy Hargrove with the dynamic “Hargrove,” a bracing original that evokes the namesake’s mastery of reconciling hard-bop’s intricate harmonic and interactive verve with late-20th century hypnotic R&B grooves and hip-hop bounce. The song also slyly references John Coltrane’s A Love Supreme, which accentuates both the earthy and spiritual nature of Hargrove’s music and Garrett’s saxophone virtuosity. “What I respected about [Hargrove] is that he was borrowing from all the different genres, different experiences and bringing it to the table,” Garrett says. “And that's what I did on this track.”

Traces of the Black American church also surge through “When the Days Were Different,” a warm mid-tempo original with a melody that fainty recalls Sounds of Blackness’ 1991 gospel classic, “Optimistic.” “The idea was to take it back to the church,” Garrett explains. “[The song] reminds me of being at a gathering with family and friends having a good time eating, drinking, and spending quality time together. ”

On the rhythmically intrepid, “For Art’s Sake,” Garrett pays homage to two legendary drummers – Art Blakey and Tony Allen. Bruner concocts a stuttering rhythm that alludes to both modern jazz and Nigerian Afrobeat, while Bird adds polyrhythmic fire with his circular conga patterns. On top, Garrett issues one of his patented searing melodies that twists and swirls as the propulsion slowly gains momentum.

Drums and percussion are again highlighted vividly on the swift “What Was That?” and “Soldiers of the Fields/Soldats des Champs.” The former finds Garrett in quintessential form as he navigates through a thicket of torrential polyrhythms and a jolting harmonic bed with the steely determination and dexterity associated with Coltrane and Jackie McLean. The latter is a magnificent two-part masterpiece that integrates martial beats, Guadeloupean rhythms, and a haunting cyclical motif on which Garrett crafts pirouetting improvisations that dazzle with their initial lithe grace and increasing urgent wails. Garrett explains that “Soldiers on the Fields/Soldats des Champs” is a tribute to the legion of jazz musicians who fought to keep the music alive. “They’re the first ones to get hit and shot at in the line of fire on the fields of justice. “Soldats des Champs” is also a tribute to the Haitian soldiers who fought against the French during the Haitian Revolution.”

The leader’s love for Afro-Cuban jazz returns on the dramatic titled-track, which begins with Garrett playing a slow melancholy melody on the piano before with music gives way to a soul-stirring excursion, filled with passionate vocal cries from Trible and moving Yoruban lyrics from Pedrito, paying respect to Orunmila, the deity of wisdom. “[The song] is about remembering the spirit of the sounds of our ancestors – the sounds from their church services, the prayers they recited, the songs they sang in the fields, the African drums that they played and the Yoruban chants,” Garrett says. The album closes as it opened with “It’s Time to Come Home,” this time Garrett uses his saxophone as a rhythmic instrument to have a conversation with the percussionist without the vocal accompaniment.

With his illustrious career that includes hallmark stints with Miles Davis, Art Blakey and The Jazz Messengers, Donald Byrd, Freddie Hubbard, Woody Shaw and the Duke Ellington Orchestra, as well as a herald career as a solo artist that began more than 30 years ago, Garrett is easily recognized as one of modern jazz’s brightest and most influential living masters. And with the marvelous Sounds from the Ancestors, the GRAMMY® award-winning Garrett shows no signs of resting on his laurels.